After the yard work, the Sikuliaq’s anti-roll system now makes for a smoother, more comfortable ride than before. By pumping water between tanks in the hull, the ship better maintains level. Upstairs from the Main lab, the lounge now resembles a lounge and not a second cantina. There’s a gaming table crafted aboard ship. There are a pair of couches set for movie watching. The TV has been moved away from the corridor wall and lowered, now less like a platform for PowerPoint and training videos and more like something someone could fall asleep to, while a film plays to the end, rolls credits, and plays the star-spangled banner. The lounge is carpeted, and there’s far less chance, now, we’ll come back tomorrow morning and find all the café chairs piled in a heap and lashed together against the port wall, the paint scratched, on the inside, by the latest storm.

The ship’s had a new paint job. The ice-like, arctic blue of the lower hull has been re-imagined as something deeper, richer, and oceanic. I’ll get used to this, though I’ve been grumbling these last few years how the new look has rendered obsolete all the photos I took of the ship set in the ice, the crew in orange and black—and black and orange suits dotting the frozen ocean, the ship steady as if set-up on blocks in a dry dock. She cleans up nice, but the sea is hard. The rust comes back. 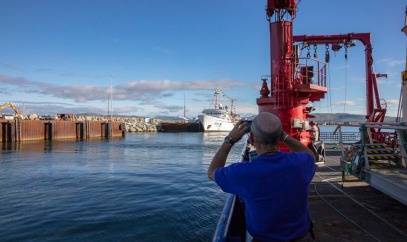